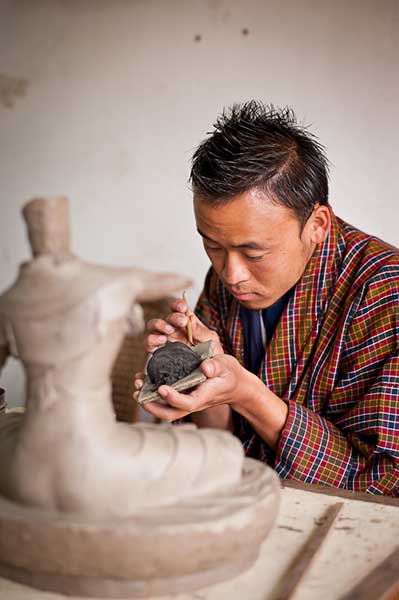 Art, architecture and culture are a unique facet of this Himalayan nation. It’s architectural style is displayed in the way houses, monasteries, Dzongs (fortresses) are built. Ancient structures, most importantly Dzongs, were built without prior planning or modern engineering techniques. In fact, the builders didn’t even use nails. At present, buildings have to fit certain architectural guidelines as per government laws so that the country’s architectural style is preserved.

The thirteen Bhutanese arts and crafts that have been in practice since time immemorial are known as The Zorig Chusum. They comprise:

Bhutan has two Zorig Chusum institutes: one in Thimphu, the capital and one in the far-flung eastern district of Trashiyangtse.

The Bhutanese costume for men (gho) and women (kira) are unique and the people take great pride in wearing them. The gho is akin to a short skirt with a “great pocket” while the kira can be intricately patterned. It is worn with “wonju” an inner blouse and a “tego” outer jacket that is secured by a broach. Both the gho and kira are firmly held in place by a “kera” (belt) tied at the waist.

All government offices require that its employees wear the national dress and on festive occasions like the “Tsechu” where crowds gather to receive blessings or witness masked dances. Men and women in ghos and kiras can be seen in their resplendent colorful glory.