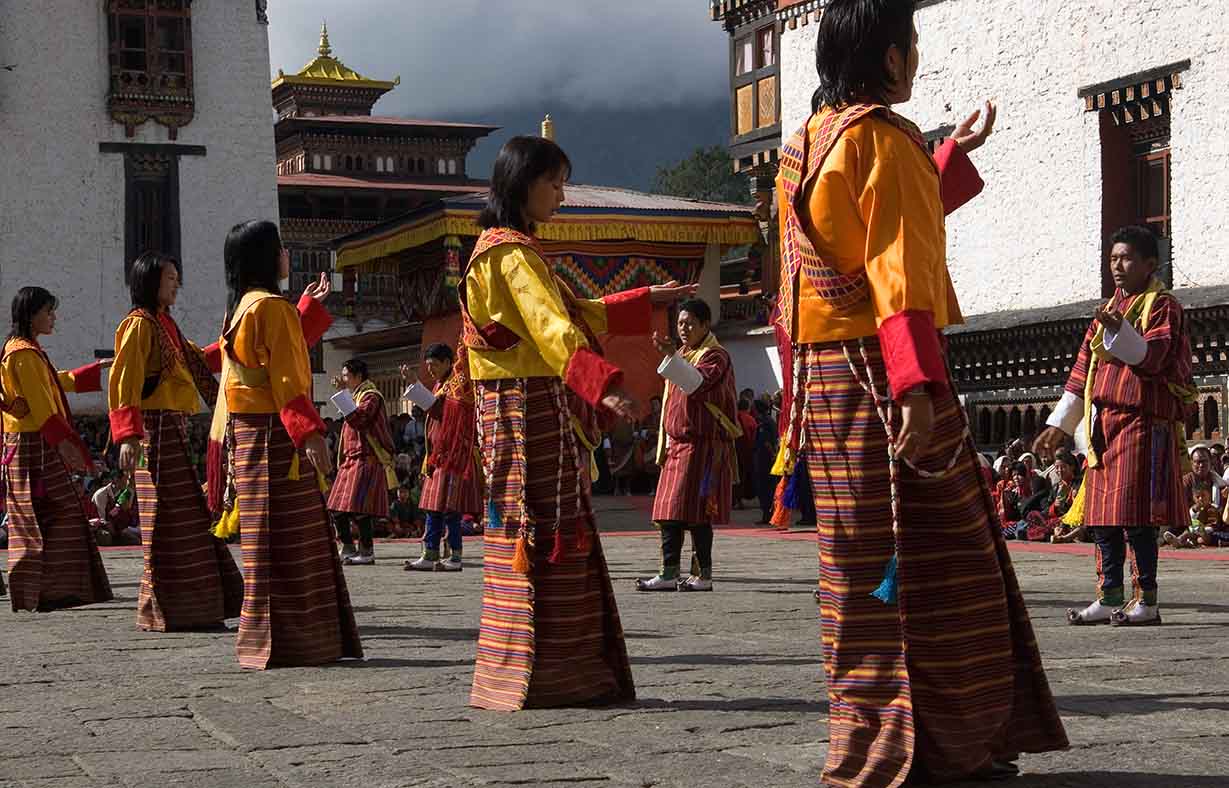 Undoubtedly, the most popular festival in Bhutan is the religious celebration “Tsechu” or tenth day of the lunar calendar corresponding with the birthday of Guru Rinpoche also known as Guru Padmasambhava. It is held across the nation in Dzongs, monasteries and temples though the dates may vary. Tsechus are festive occasions when the Bhutanese dressed in their best attire come together to socialize and watch mask dances. Each mask dance is said to represent an incident in Guru Rinpoche’s life and has a symbolic meaning behind it. It is believed that a person must watch a mask dance at least once during his lifetime so that he is cleansed from his sins and bad karma. The most popular Tsechus are held in Paro and Thimphu with many tourists attending. Tsechus offer an opportunity to witness the Bhutanese culture in all its resplendent colors and glory, and it is a wonderful time to take memorable pictures. The other popular festivals are Gomphu Kora in Trashigang and Chorten Kora in Trashiyangtse, both in the East. Gomphu Kora is located 23 km from Trashigang Dzong, and 2 km from Duksum, a quaint hamlet consisting of a few shops. Gomphu means “meditation cave” and Kora means “circumambulation”. The name is derived from a cave formed out of a rock face next to a temple that has been built as a tribute to this sacred site.

Legend has it in the 8th century AD, an evil spirit named Myongkhapa escaped from Samye in Tibet when Guru Padmasambhava, was spreading the Dharma. Myongkhapa followed the course of the present-day Kholongchhu stream and concealed himself inside a rock where Gomphu Kora stands today. The Guru followed the evil spirit, meditated for three days inside the rock cave and finally subdued it. Meanwhile, the Chorten Kora is held in Trashiyangtse, the easternmost district of Bhutan, two hours’ drive from Trashigang following the banks of Dangmechu and Kholongchu rivers. Lama Ngawang Loday built the chorten (stupa) in 1740 on the site where a demon was subdued, replicating the Boudhnath stupa in Nepal. Today, it is considered one of the most important historical Buddhist structures. Further, a legend states that a young girl from Tawang, believed to have been a Khando (Dakini) agreed to be buried alive inside the Chorten. For this reason a ritual known as Dakpa Kora is organized every year where hundreds of people from Arunachal Pradesh known as the Dakpas arrive at Chorten Kora to circumambulate.